Quality of Life in a Lovable City

An article written by Martin Barry on what lovable (and livable) cities are all about.

Nearly once per week, I read a headline or full article that goes something like this: “Want to Know Where to Live? These Cities are Best for quality of Life.” Or, “Top 25 Most Livable Cities.”

There is a group of us in the international urbanism community, mostly well read in all Jane Jacobs books on cities, who believe that everyone who lives in the city is an urbanist, or urban designer. The belief is that if you talk about cities in some way, be it about your commute to work, new rules on the playground, the way municipal funds were spent on transport infrastructure, the flooding in the last storm, or complaints about rubbish removal or sidewalk maintenance, you are talking about urban design. You are talking about your quality of life in the city you live.

Ultimately, we are an urban species. The world is urbanizing at an alarming rate, particularly in the global south. Cities around the world are growing at the rate of about one million people per week.

You might already know now, that we have past the point where more than half of the world’s population lives in cities, and by 2020 some 2.7 billion more people will be living in the world’s cities than do at this moment (EIU 2013). By 2050, the number will be 70%. Over the next century, cities will continue to be centers of economic growth, innovation, and habitation for the world’s most productive people. The reason: proximity matters. Good ideas and innovation are born in environments where people can exchange ideas and share information.

According to the Economist Intelligence Unit, the cities of North America and Western Europe are and will continue to be the most innovative and competitive in the world until at least 2025 (EIU 2013). If we are to continue to focus on urban development, we must plan and design in a way that makes cities “cool, creative and in control” if urban centers are to be magnets for the next generation of productive citizens.

So, what does it mean to be livable?

In 2012, then New York City Mayor Michael Bloomberg wrote what I believe to be a seminal popular article in the Financial Times. His argument? “As individuals and capital become ever more mobile, cities are in competition for people, visitors, and business.”

With urban centers attracting young and educated workforce, while also calling back older generations due to convenience of culture and transit options and more than half of the world’s population living in cities – they are generating roughly 80 percent of global output. With this in mind, cities cannot afford to sit back while their national governments dictate planning, sustainability, creative, culture, infrastructure and growth strategies. Cities need to be In control of their destiny. The public sector, private sector and civic sector can work together to implement visionary urban plans that focus on quality of life for the cities denizens.

A dramatically new approach is required if we are to bring a human-centered perspective to designing livable cities with a higher quality of life in the coming century. While the cities of Central and Eastern Europe are far from the microphone of urbanism and future cities discussions, the region is ripe with new ideas and new perspectives on bringing contemporary urban ideas and participatory design to bear on a complicated past, replete with medieval buildings and a post-communist/pre-modern mindset.

At reSITE, we make the argument (as Bloomberg did as Mayor of New York City), that public space, high quality parks and easy walking access to public transit are essential elements to city design in this century. Design matters. Design of the details matters when we talk about how a street feels, or how a public plaza near the metro feels to us psychologically. Younger generations in cities tend to care deeply about how their public spaces feel , indicating the importance of thoughtful design. Recent university graduates, who by-and-large do not own cars, nor do they want to, are flocking to cities with a plethora of cultural and public space. They are not flocking to these cites merely for employment opportunities. They are coming because it is in these places with trees on the street, lively pedestrian retail zones, vibrant restaurants and cafes, and access to new ideas in the technology and creative industries offer an inspiring lifestyle. They offer a high quality of life.

Of 120 “livable” cities ranked in the Economist Intelligence Unit report (2013), our city – Prague - ranked 54. This middle-of-the-road placing suits the contemporary Czech condition quite well. As the popular Czech architecture critic, Adam Gebrian, points out, the Czech and Slovak national creed is “nothing ventured, nothing lost.” But, it doesn’t need to be this way.

Many aspects of highly desirable cities are not quantifiable. They are intangible. They cannot be measured on standard “quality of life indexes.” Being cool is intangible, but you better be sure that it counts and if your city, or investment is not trying to be cool, be aware, it will not compete in this century. We are too mobile, too global, and with too many available options competing for our work and our roots.

Not long ago, the architecture and planning community contended that flashy, multidimensional cultural buildings were the drivers of cultural vibrancy and neighborhood development with subsequent investment in the public realm. This is still the case in many developing countries, and may still play a positive role (if it ever did in our developing country). Unfortunately, it is still the prevailing mentality in Central and Eastern Europe. Proper planning is shifting toward a focus on public space, walkability, autonomous vehicles, increased public transit options like car and bike share or other sharing economy features as a means of activating and sharing the city.

In a 2013 study directed by the Architectural League of New York, Success Looks Different Now: Design and Cultural Vitality in Lower Manhattan, author Raymond Gastil (2013) contends that iconic public space is the main driver of vitality in Manhattan and cities that can build dramatic civic space are the new “it” cities. “Well-designed, heavily used public space is already both symbol and embodiment of New York’s cultural vibrancy,” argues Gastil (2013: Recommendations and Conclusions). The focus on public space investment in cities like New York, Seoul, Pittsburgh, Paris, Barcelona and London have paid huge dividends as those cities continue to climb competitiveness rankings and their productivity increases as a young workforce flocks to the cities.

Globally respected theorists and critics such as Michael Sorkin and Michael Kimmelman, both who have spoken at reSITE, have also criticized city and developer focus on the merit of individual buildings in our cityscape.

Both Sorkin and Kimmelman claim that we should refocus our attention on civic and public sites. In the end, people come to cities to make their lives better – to improve their quality of life. “They want to eat, meet, and make love so we should focus on the places where those connections happen—in streets and squares” says the British world renown architect, Richard Rogers. The point is that if we want to improve the quality of life in our cities, our focus should be on the spaces in between the buildings.

To the delight of landscape architects and urbanists, attention has turned to public space and urban landscape as the savior of livability in the modern city. The construction of iconic public space is now the symbol of a cool city, as Pittsburgh (US) city planner Gastil contends. Rightfully, buildings have become secondary in the discussion of city making because it is the space between that creates serendipity, connection, and innovation. If we set the urban stage to help facilitate these special urban, yet intangible moments, we will enrich urban developments because the magic in cities are in public space where chance encounters and surprise are interlinked to enhance our experience of living in the city.

Martin Barry is a landscape architect, and the Founder and Chairman of reSITE, Prague-based NGO on more livable cities. On June 16-17 reSITE hosted in Prague the fifth-annual conference and festival reSITE 2016: Cities in Migration about sustainable urban development. This year, 49 international experts from 20 countries presented and discussed architecture and urban migration – the design and planning that has been successful in attracting new and diverse residents to global cities. In 2016, Martin was awarded ASLA “Community Service Award”.

Kimmelman talks about his current research, writing and thoughts about sustainability and the urban condition in Prague. 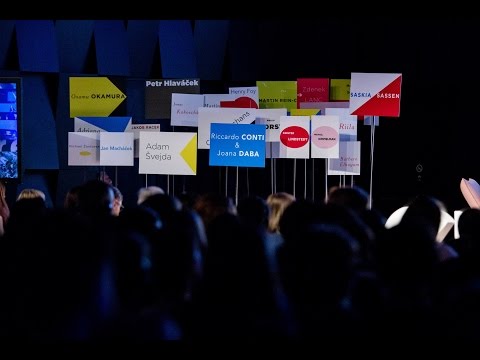 The Most Interactive and Lovable Cities Conference: reSITE 2016